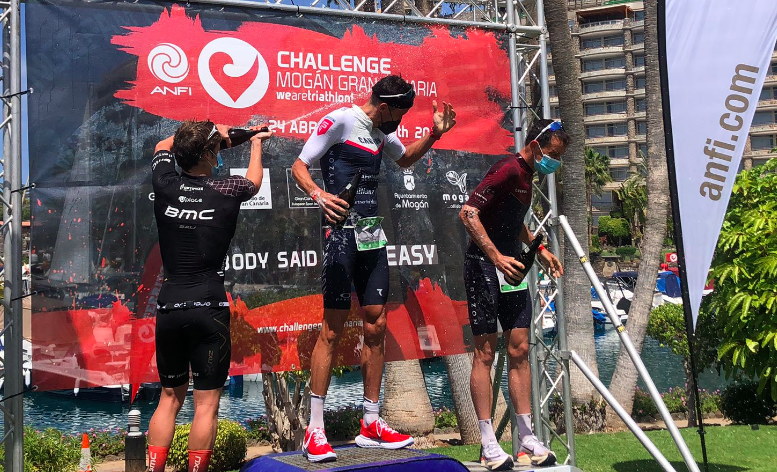 On a sunny and pretty hot day in Gran Canaria, Jan Frodeno showed once again – after his stunning victory at Challenge Miami – that he is the best athlete of this generation. The German world champion was in the leading group of Challenge Gran Canaria through the swim and bike, but made the difference during the run, where he powered away from his competition, ensuring his victory was never in danger. He won the race in 3:41:21. In the end, the silver and bronze went to Pablo Gonzalez Dapena (+1:09) and Nick Kastelein (+1:21). After an almost perfect race, Switzerland’s Nicola Spirig just won Challenge Gran Canaria as well in a time of 4:05:52. She was in the lead pretty much from start to finish, which made for a comfortable win. The silver and bronze went to Dutch athlete Sarissa de Vries (+5:25) and Sweden’s Lisa Nordén (+5:51).

While the men largely stayed together during the swim, Switzerland’s Andrea Salvisberg was first to enter the transition area after a 21:43 swim. He was followed by France’s Sam Laidlow, German favorite Frodeno, Australia’s Nick Kastelein, Belgium’s Pieter Heemeryck and Spain’s Pablo Dapena Gonzalez, among others. The only two favorites who were slightly further behind were Patrick Lange (+46) and Frederic Funk (+1:03).

On the bike, it was initially Jan Frodeno, Pieter Heemeryck and Sam Laidlow who broke away in a group of three, but Giulio Molinari and local favorite Pablo Dapena Gonzalez soon caught them, which meant that after 12 km there was a lead group of five. Not much later, Italy’s Mattia Ceccarelli also joined the leaders, while Laidlow was involved in a crash and lost the leading group.

Not entirely to Frodeno’s liking

The five leaders actually stayed together throughout the bike, although the order changed regularly. For a while it seemed that this was not entirely to Frodeno’s liking – at one point the world champion shouted that he could not get away from his competitors. In the last kilometers some chasers, including Andi Böcherer, Patrick Lange and Nils Frommhold, closed the gap, so all the favorites started the half marathon relatively close.


By the four kilometer point of the run it was immediately clear that Frodeno had no desire to wait any longer and would try to run away from everyone. By then he already had a one-minute lead on his first pursuer, Gonzalez Dapena. Böcherer followed fourteen seconds behind the Spaniard, while Molinari, Lange, Kastelein and Heemeryck were very close to him. Not much later Lange and Kastelein would advance to a shared fourth place, running side by side, making up time on Gonzalez Dapena. The rest of the athletes started to drop back from this point.

With eight kilometers to go, Frodeno was of course still in the lead, but it was Patrick Lange who was possibly even more on fire. He was closing on Frodeno and, perhaps more importantly, had pulled clear from Dapena Gonzalez and Kastelein, who were running behind Lange in third and fourth place.

Changes in the last part of the run

During the last part of the run, however, things suddenly changed. Frodeno continued on to victory, but Lange lost his momentum while Gonzalez Dapena managed to accelerate. The Spaniard moved back to second place and did not relinquish it until the finish line, which he reached 1:09 after Frodeno. Eleven seconds behind him Kastelein took the bronze.

During the swim it was Spain’s Sara Perez Sala who, as she did at Challenge Miami, proved to be extremely fast in the water, getting back to dry land in 24:55 after her 1.9 km swim, with Spirig and de Vries showing their swimming skills just 10 seconds behind.

She traveled to Spain to win

On the bike, Spirig immediately showed that she had traveled to Spain to win, taking the lead and opening a gap on the rest of the field. Meanwhile, Sweden’s Lisa Nordén started to catch up through the hilly course, moving up to second position. Behind her Sarissa de Vries held her position, while Perez Sala dropped back to fourth position.

While De Vries soon caught up with Nordén and the two women chased Spirig, the Swiss favorite managed to increase her lead. With about 25 km to go, Spirig had extended her lead to one and a half minutes and seemed to be in an excellent position for the win.


Pushing for a top finish

During the final kilometers on the bike, Spirig’s lead continued to grow, which meant the Swiss favorite could start the final half marathon with a comfortable lead. It was a different story for Nordén and De Vries, who returned to the transition zone at nearly the same time, making for an exciting race for second.

While Spirig’s lead continued to grown on the run, De Vries and Nordén exchanged positions, but did not get away from each other. That changed over the last few km as De Vries proved to be the stronger of the two and would eventually run away from Nordén. After Spirig crossed the finish line in first, De Vries would cross next, with Nordén eventually finishing third.