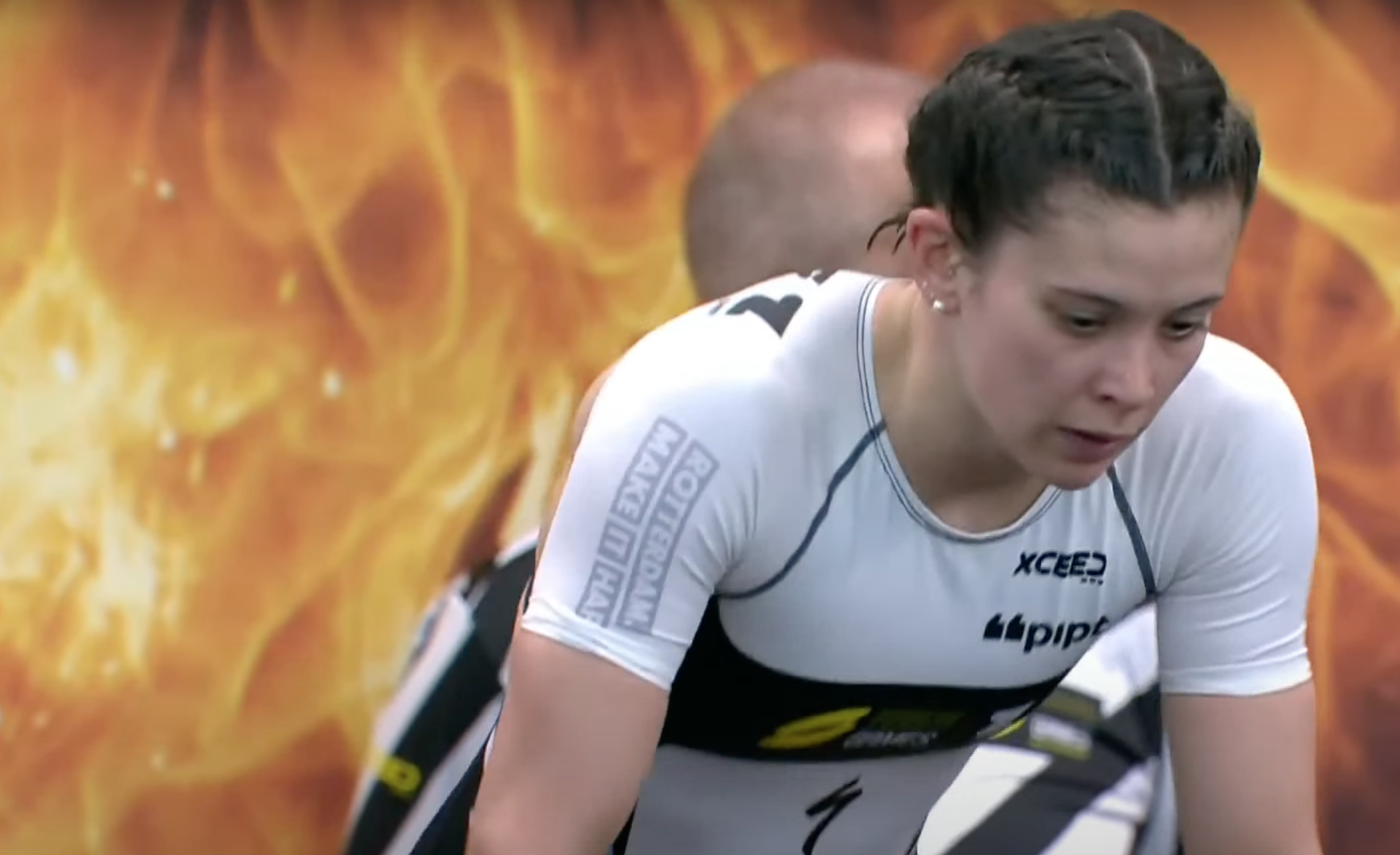 At the exciting and nerve wracking Super League Triathlon (SLT) Arena Games in Rotterdam, Britain’s Sophie Coldwell managed to outrun Beth Potter (GBR). Coldwell was expected to be the best swimmer, and possibly even the top biker, but her impressive runs, even leaving behind Potter, who has proved she’s in excellent shape after winning the SLT Arena Games London and running 14:41 for 5 km a few weeks ago, came as a complete surprise. Coldwell took an impressive win in today’s SLT Arena Games, while Potter had to settle with second place overall with the third podium spot going to Spain’s Anna Godoy.

During today’s race the distances were slightly different compared to the SLT Arena Games in London. As in London, athletes swam 200 meters and ran 1,000 meters, but the bike was a kilometer shorter at 3 km. All of these disciplines were completed three times over three heats, each time in a different order. In each heat athletes could earn up to ten points, which were then added together for the final ranking.

Find the report of the men’s race here.

In the first heat – starting with a swim – Coldwell created quite a gap on her chasers: Potter and Maya Kingma (NLD). Potter was just two seconds back as she got ready for her best discipline: the run. After about 500 meters Potter closed the gap to Coldwell, before taking off on her own and leaving Coldwell and Kingma behind. Potter clocked 3:09 for the 1,000 meters run, with Coldwell taking three seconds longer to cover that distance. On the bike Potter extended her advantage more. Potter took the win in the first heat with an 11-second margin on Coldwell, while Kingma – who had to out sprint a big group on the bike – finished third.

After Potter dominated the first run, it was a Italy’s Ilaria Zane who surprised everone by taking off fast on the run in the second heat. However, after a few hundred meters, she was caught by Coldwell and Potter. Even though Coldwell ran 3:12 over 1 km in the first heat – which could have burned all her matches – she managed to run fast again, even leaving Potter behind. Getting off the treadmill and making their way to the bike, Coldwell enjoyed a three-second advantage on Potter. Godoy was right on their heels and the three athletes quickly formed a pack. Thanks to a quick transition, Godoy was the first of these three to jump into the water. Coldwell showed her great swim skills and managed to stop the clock in first, earning ten points in the second heat. Potter finished second, which meant Coldwell and Potter shared first place in the overall ranking after the first two heats; both having earned 19 points. Godoy finished third in this second heat and shared third place overall with Lisa Tertsch (GER), both with a total of 13 points.

Starting the last heat on the bike, all ten athletes grouped together and no one managed to ride off due to Zwift’s draft settings. It was Kingma who managed to finish the bike first, but all nine athletes followed right in her footsteps. In the water Coldwell took the lead again. Kingma, Godoy and Potter followed within four seconds. The battle between Potter and Coldwell was now on, with everything depending on the last 1,000 meters of running. On paper, it was Potter who should do best, but Coldwell had showed in previous heats she was in great running form, too. It turned out Coldwell wasn’t too tired to prove that run shape again. She quickly ran away from the rest of the field, leaving Potter behind and claiming not only the win in this third heat, but the overall title as well. Behind her, Potter finished second, to nail second place overall. Kingma and Godoy fought for the third podium spot, with Godoy, who finished just ahead, earning the bronze medal.

Results of all three heats: