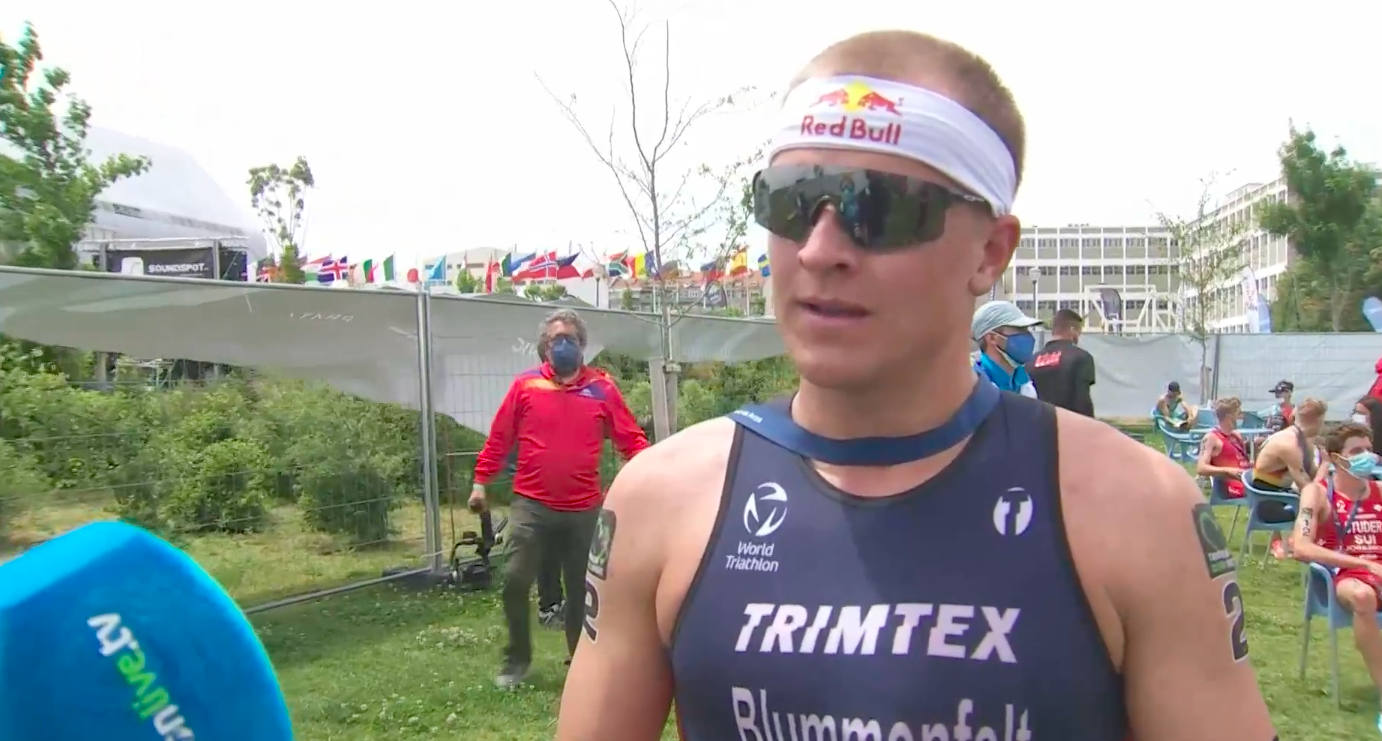 Last week Norway’s Kristian Blummenfelt won the WTCS in Yokohama and today he proved inimitable once again: after a devastating acceleration in the last kilometers of the run, he just won the World Triathlon Cup Lisboa.

The race started somewhat remarkably, after a false start by a number of athletes and the decision of the jury to whistle back all athletes who did enter the water on time and to hold a second start. What followed was a swim under quite rough conditions where all the athletes initially stayed close together. This did not mean taking it easy, though, as it took them only 7:45 to finish the first 750 meters lap of swimming. The always-strong Richard Varga was in the lead at that point.

In the second swim loop, the field of athletes was stretched a bit more and more gaps started to appear. Meanwhile, the pace remained high, as was evident when Varga headed to transition after 16:12.

On the bike, it was initially Varga and Jonas Schomburg who pulled together and took the lead, but it would not be easy for the Slovakian and German: not far behind them was a large group of about fifteen athletes who seemed particularly motivated to ride to the front as quickly as possible. It took less than a few kilometers for the two to be caught up and soon an even bigger breakaway group (33 athletes) emerged. Behind them, there was a large chasing group.

The second group did start to make up time during the bike. Spain’s Mario Mola was the biggest favorite in this group. Halfway through the 40 km bike, the chase group had made up about half of the gap and was just 25 seconds behind the leading group. Not much later, the group merged into one big group of 55 athletes. This group stayed together – without anything really interesting happening – until T2.

Despite the fact that so many athletes were in the transition area at the same time, the transition went smoothly and there were no irregularities. The fastest of the group was definitely Schomburg, who took the lead again just as he did during the first few kilometers on the bike. Behind Schomburg, there was a chasing group of seven athletes with Kristian Blummenfelt and Marten van Riel the biggest names. Not much later, the chasers caught up to Schomburg.

Halfway through the run, five men were still in the lead: Switzerland’s Max Studer, France’s Tom Richard, Spain’s Genis Grau and Schomburg and Blummenfelt. It was mostly Struder and Schomburg who kept the pace high during this part of the race.

With 2.5 km to go, it was Blummenfelt who put on an enormous acceleration and managed to let go of his competitors except for Studer – the Swiss athlete boldly joined in, then even tried to accelerate himself. He hurt Blummenfelt visibly with this surge, but the Norwegian was still able to catch up. From this point on, a very interesting battle developed, because not much later Blummenfelt started to accelerate again and created the first real gap of the race.

He never lost that gap and continued to victory in 1:42:32. Silver went to Studer, who finished nine seconds later. Grau took the bronze 23 seconds behind Blummenfelt.