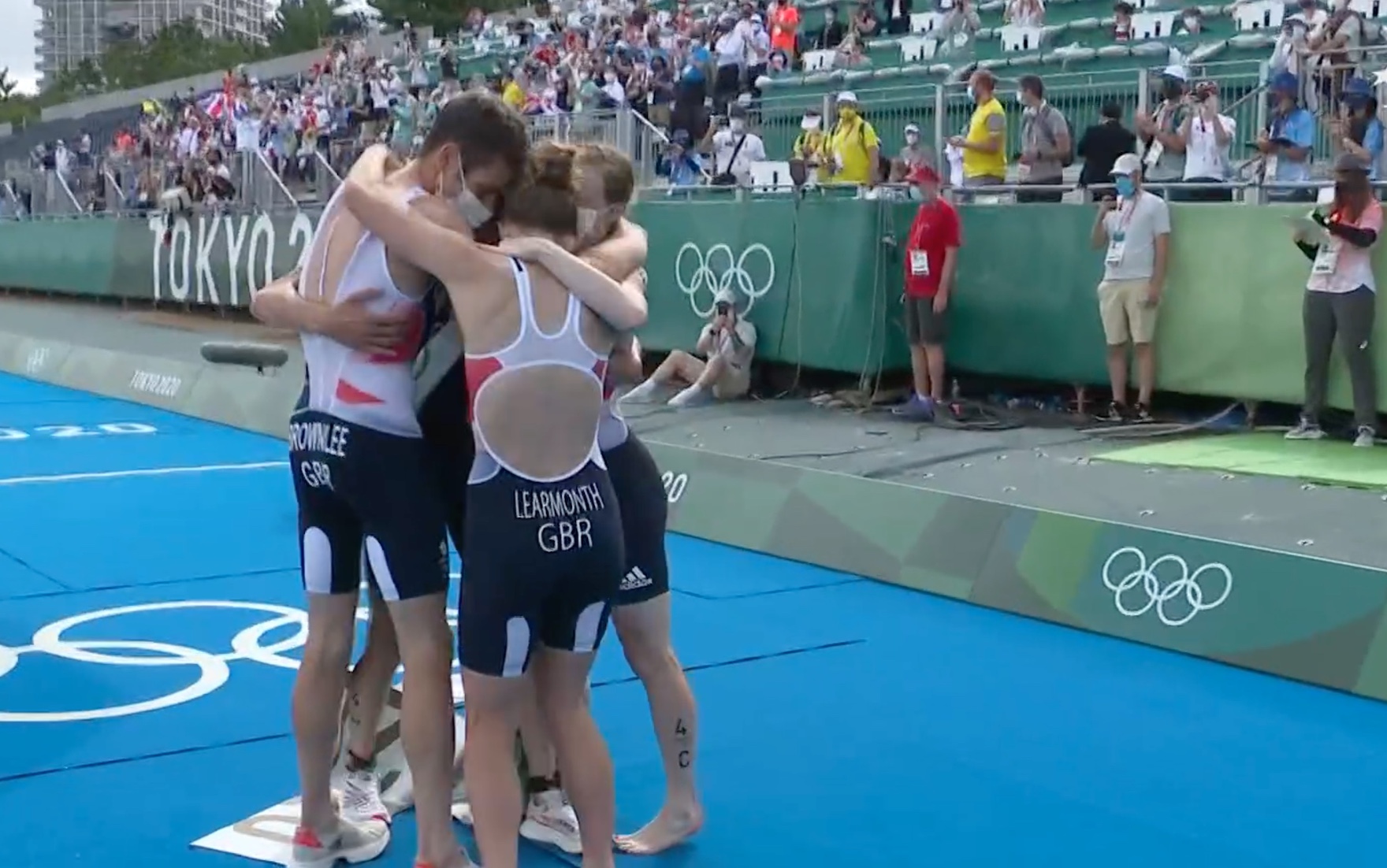 From start to finish, they dominated the race. Great Britain earned the golden medal at the inaugural Mixed Relay Olympic event as Jessica Learmonth, Jonathan Brownlee, Georgia Taylor-Brown and Alex Yee took the medal home. America (Katie Zaferes, Kevin McDowell, Taylor Knibb and Morgan Pearson) earned the silver medal and France (Leonie Periault, Dorian Coninx, Cassandre Beaugrand and Vincent Luis) claimed bronze. We had to wait until the final leg to see which podium spot was going to belong to which country as it turned into an epic, and special, inaugural Mixed Relay event at the Olympics.

300 meters of swimming, 6.8 km of cycling and 2 km of running – that’s the distance each of the four athletes from each country had to cover before the next person took off, starting with one of the women, then a man, then a woman and the final heat would be in the hands of a man again.

Leg 1: Great Britain, America, The Netherlands and Germany in the lead

Right when the gun went off, it was the Netherlands’ Maya Kingma who showed to be on top of her game, diving into the water within an instant and quickly moving to the front of the field. After 300 meters, it was no longer The Netherlands in the lead, but Great Britain instead. The Netherlands followed, then America in third place and Australian in fourth. Once in the saddle, Learmonth set the pace, but Kingma didn’t let Great Britain escape and thus the closed the gap. Together with American Zaferes and Germany’s Laura Lindemann, they formed a pack. A fast transition saw Learmonth leave T2 in first place. The other three ladies followed right after her. It took 26 seconds before the big group got to rack their bikes. On the run, Zaferes (USA) and Learmonth (GBR) were clearly the strongest athletes. It was America who ended up, being first to hand off to the next athlete. Great Britain started the second heat in second place (+0:01), Germany pulled of a nice sprint and left the pontoon in third place (+0:02). The Netherlands were in fourth place at this point (+0:04). The fifth country – France – started their second heat 30 seconds later. France was the first country of the large bike pack (+0:26).


Leg 2: Brownlee (GBR) makes a difference on the run

In the water Jonas Schomburg (GER), McDowell (USA), Brownlee (GBR) Marco van der Stel (NLD) stayed together, and thus it seemed like this same formation was going to head out on the bike course. The gap to Italy, the fifth country, was 36 seconds at this point. On the bike, the gap to the chasers – Belgium, Italy and France – shrank a little, being brought down to 26 seconds. It was Brownlee who was first out onto the run course, still followed by America, Germany and The Netherlands. Over the 2,000 meters run, Brownlee, leading the field, managed to find a seemingly painful, but fast rhythm. McDowell hung in there, although he couldn’t match Brownlee’s speed. Soon The Netherlands and Germany dropped back to a third and fourth place with a gap of nine seconds after the first 1,000 meters. Brownlee created a gap of nine seconds before the Americans started the third leg in second place. Rachel Klamer, representing The Netherlands, dove into the water in third place (+0:22), Germany in fourth place (+0:23), France in fifth (+0:30) and Belgium in sixth (+0:39).

On the run during the second heat, France had closed much of the gap that was created between the front pack and chasers, but in the water during the third heat they did even better, finding the feet of Germany. Taylor-Brown exited the water in first place for Great Britain, enjoying a buffer of 23 seconds to Taylor Knibb for America. Third place belonged to France (+0:26), Germany in fourth (+0:28), The Netherlands in fifth (+0:31) and Belgium in sixth (+0:33). Taylor-Brown pushed hard on the bike and left behind Taylor Knibb (USA) on this second discipline. Beaugrand (FRA) was dropped and was swallowed by the chase group containing The Netherlands, Germany and Belgium. By the time the first athlete – Taylor-Brown (GBR) – conquered the run the difference with the second lady – Knibb (USA) – was eleven seconds. Germany followed in third place (+0:38), Belgium in fourth (+0:40), France in fifth (+0:40) and The Netherlands in sixth (+0:42). America chased Great Britain on the run, but getting closer to Taylor-Brown, who was on fire, seemed nearly impossible. From the athletes that were waiting to do their work for the final leg, Yee was the first to get into the water. America needed 21 seconds longer to send off their final athlete. France was in third place (+0:33). The Netherlands, Belgium and Germany entered the water at the same time, with a gap of 53 seconds to Great Britain.

Yee didn’t give away Great Britain’s advantage on America and France. Great Britain reached T1 in first place, followed by America (+0:17) and France (+0:19). Germany, Belgium and The Netherlands were nearly one minute down. It was to be expected that America and France would work together on the bike to try and get closer to Great Britain, but Luis (FRA) had something else in mind and took off on his own, leaving Morgan Pearson (USA) behind. Surprisingly, France managed to get back to the front, finding the wheel of Great Britain. Although Pearson had to do the work all by himself, he managed to stay relatively near these two leading man in a third place. After a perfect transition, Yee was first to rack his bike and go onto the run. Luis was in second place (+0:03) and Pearson in third (+:0:09). Belgium, Germany and The Netherlands followed at about 47 seconds.

Strong runner that he is, Yee (GBR) was on fire during this final stretch of an exciting race. Luis (FRA) saw the gap towards Yee get bigger within the first hundred meters, while Pearson (USA) saw a chance to run to second place. America executed that plan well, and managed to move ahead of France. Yee didn’t even seem to struggle much in the front. Thanks to some impressive racing by all four British athletes, it was Great Britain that lifted the tape and earned the gold medal. America took home the silver medal (+0:14) and France crossed the finish line in third place, completing the podium and earning the bronze medal at the inaugural Olympic Mixed Relay event (+0:23). The Netherlands finished fourth (+0:53) and Belgium sixth (+0:55).