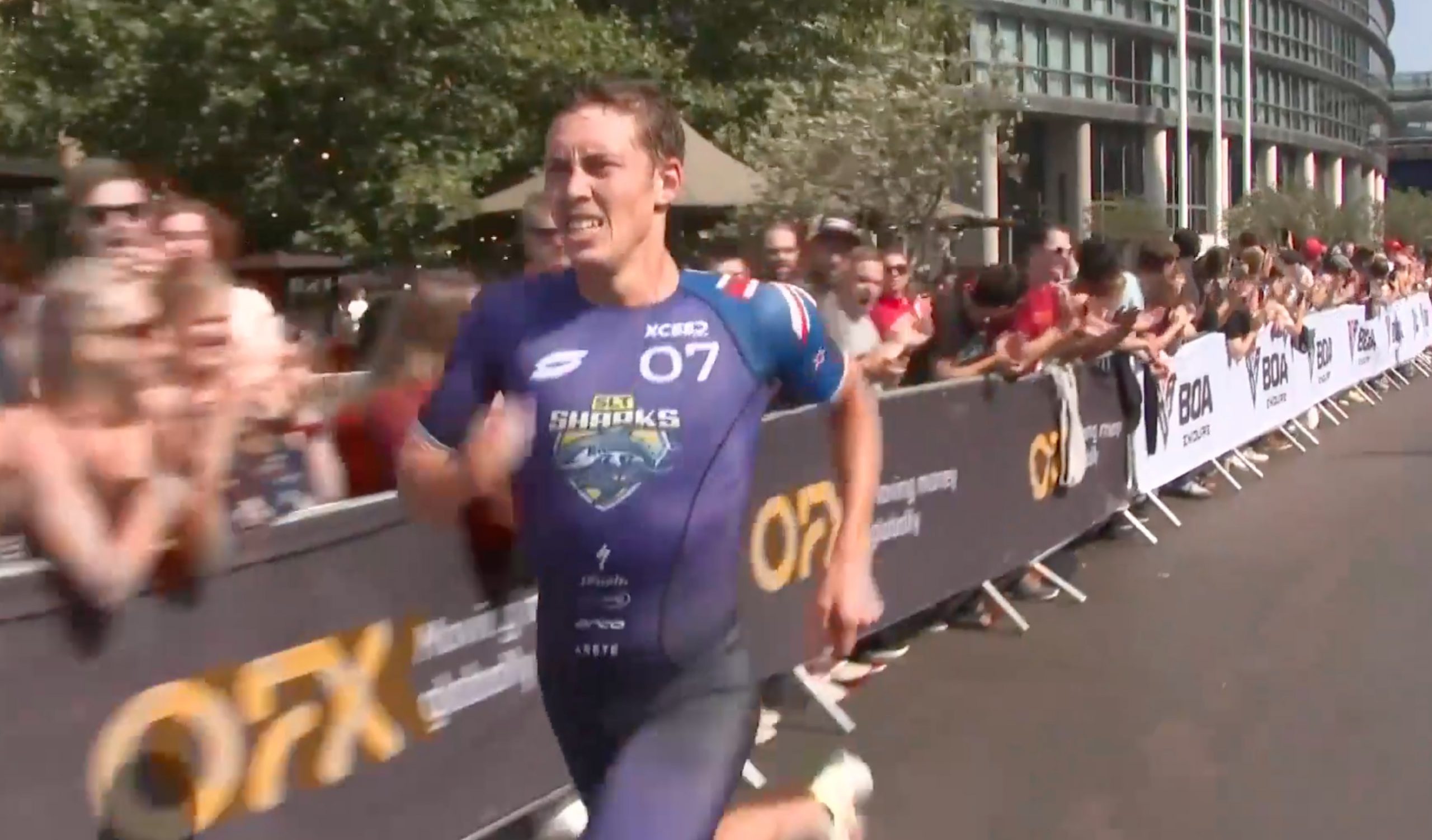 What a way to use the short chute that New Zealand’s Hayden Wilde earned himself by racing a strong first heat: he got to take a short-cut in the final run of today’s Super League Triathlon in London, and that saw him take the win of this fast and exiting event. He shared the podium with France’s Vincent Luis, who took second, and Britain’s Jonathan Brownlee, who crossed the line in third place.

Athletes completed three short triathlons, each good for 300 meters of swimming, 4000 meters of cycling and 1600 meters of running. However, each of three legs athletes would cover this short triathlon in a different order, starting with the traditional swim-bike-run, then a run-bike-swim and finally a heat of bike-swim-run.

Heat one: Wilde runs to the win

Australia’s Matthew Hauser was the fastest swimmer in the first heat, but once on the bike he was soon caught by a big group of nine athletes. In the second part of the bike he dropped back though, due to a mechanical problem with his bike. While Hauswer dropped back, Wilde attacked and took off alone. That saw him enter and leave T2 in first place, with which he earned the possibility to take a short chute on the run whenever he wanted to in the upcoming heats. On the run, six athletes remained together, battling for the win. Wilde was soon caught by this group, but still he managed to run to the win after a final sprint. Portugal’s Vasco Vilaca passed the line in second place and Jonathan Brownlee took third.

It came as no surprise to see Alex Yee run to a strong lead in the second heat. Vilaca, Wilde and Australia’s Jacob Birtwhistle followed closely. On the bike, Yee, Wilde, Luis, Brownlee and Birtwhistle came together. Four athletes found a connection with that group later on, which saw nine athletes dive into the water simultaneously. Luis quickly moved up to first place in the water and stayed there until the finish line. Brownlee took second and Wilde claimed the bronze.

Heat three: Wilde runs to win thanks to short chute

Based on the time differences in the first two heats, it were Luis and Brownlee who got to take off in first and second place on the bike. Wilde followed in third position a handful of seconds later, but he was burning to catch the leaders. He managed to do so after about 1000 meters of cycling and thus a group of three took shape. During the swim that followed, Luis took the lead. Brownlee was first to follow in his slipstream, and Wilde had to work back from a third place on the run. Good thing for Wilde that he still had a nice card on hand to play in the last heat: the short chute he earned during heat one. He used it in the final stretch of the run, just after he got back to Luis and Brownlee. Thanks to the short chute, Wilde was suddenly in first place, and that didn’t change until the finish. Therefor, it was Wilde taking the day, Luis finished in second place and Brownlee rounded the podium.