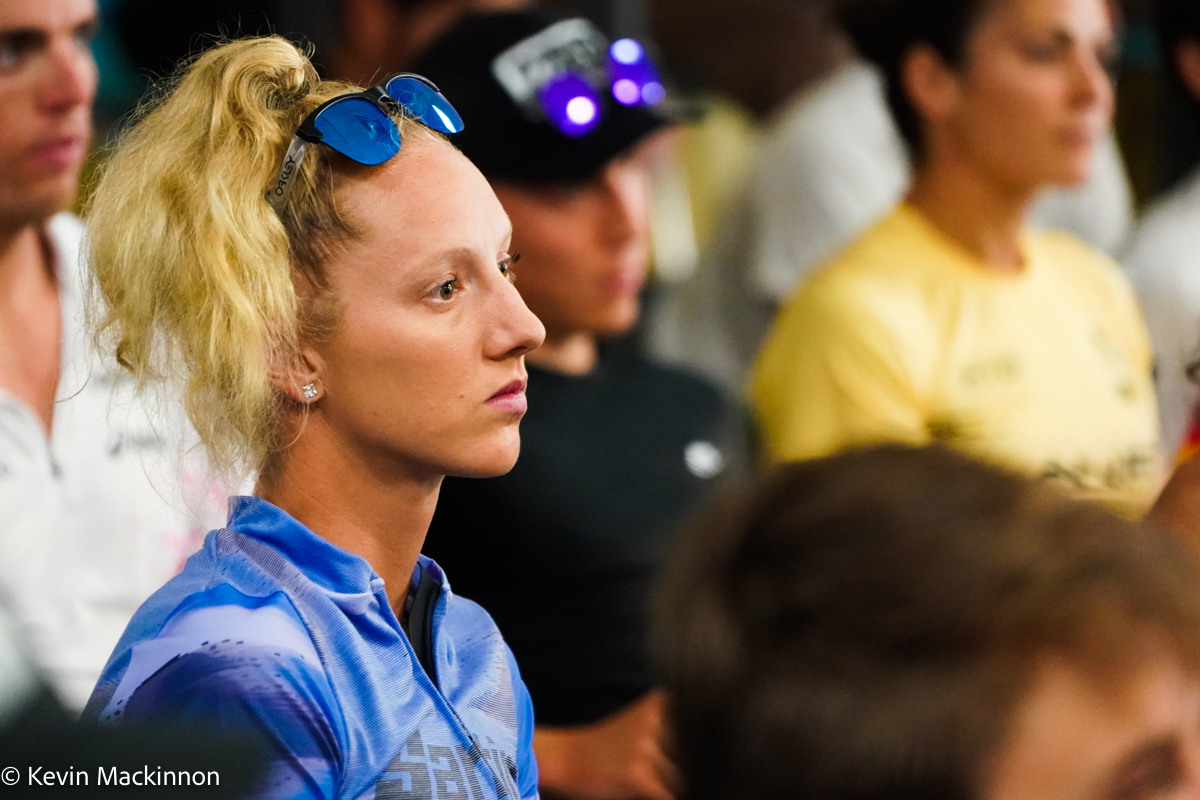 Today’s press conference only featured six of the 40 athletes who will be on the start line tomorrow, but they represented not only a group of athletes who could very well compete for the win, but also some of the sport’s premier short-course and long-distance athletes.

Here are some notes on the six athletes who were at today’s press conference:

A runner-up finish at the Ironman 70.3 World Championship behind Gustav Iden thrust the 25-year-old into the spotlight, and he’ll wear the lowest men’s number, 41, at Homestead-Miami Speedway tomorrow. Long says he’s very focussed on his preparation for St. George right now, so he’s been working hard on his swim to try and be competitive at that event.

The 32-year-old British athlete had a great 2021 season with three half-distance wins (Ironman 70.3 Florida, Rev3 Williamsburg and 70.3 Boulder), along with runner up finishes at Ironman 70.3 Des Moines and California. She was fifth at the 70.3 worlds and is the highest PTO World Ranking athlete in the field at number six. She knows she’s in for a tough day in Miami, tomorrow, though, because there are so many strong swimmers in the field (see below).

The 2016 Olympian worked hard to try and make the American mixed relay team for Tokyo last year, but wasn’t chosen for the team. He’s now set his sights firmly on long-distance racing, and comes into this race as a man to watch thanks to his strong swimming ability and his run speed. He’s no stranger to winning big races or being near the front – he was second at the Ironman 70.3 World Championship in Chattanooga in 2017 and is a four-time Escape from Alcatraz champion.

The 34-year-old from Spain burst onto the long-distance scene last year when she came out of the water with Lucy Charles-Barclay, then managed to stay with the British star for much of the bike. While she faded on the run to finish fourth, she proved that she has the potential to be a force over longer distances. She took second at the Challenge Championship last year, and is keeping her Olympic dreams alive – she raced at WTCS Abu Dhabi last fall.

The 28-year-old Canadian had a miraculous comeback in 2020 and 2021 after a terrible accident on the bike at the Ironman 70.3 World Championship in Nice. He’s in recovery mode again after a bike crash where he broke his thumb and a rib in January, but appears to be in great shape and could contend for the podium tomorrow. He’s a three-time 70.3 champion and was fifth in St. George at the 70.3 worlds last fall, so he’s certainly capable of a big day.

The two-time Olympian from Australia has decided to turn her sights to long-distance racing this year, and sees the race here at Clash Miami as an excellent opportunity to move up. She won Ironman 70.3 Xiamen in 2019, and she is an eight-time winner of the prestigious Noosa triathlon, a non-drafting Olympic-distance race in Australia, so she’s shown she can compete in non-drafting events.

Chelsea Sodaro (USA) continues to improve on what was an impressive comeback to racing after delivering daughter Skye last May.

Sophie Watts (USA) could be the fastest runner in the field, if she’s over the hip injury that required surgery last August.

Australian Aaron Royle is fresh off a $100,000 payday after he and partner Non Stanford took the Couples Championship.

Uber-cyclists Magnus Ditlev (DEN) and Andreas Dreitz (GER) could bike their way to the front (along with Andrew Starykowicz ). Can they create enough of a gap to hold on?