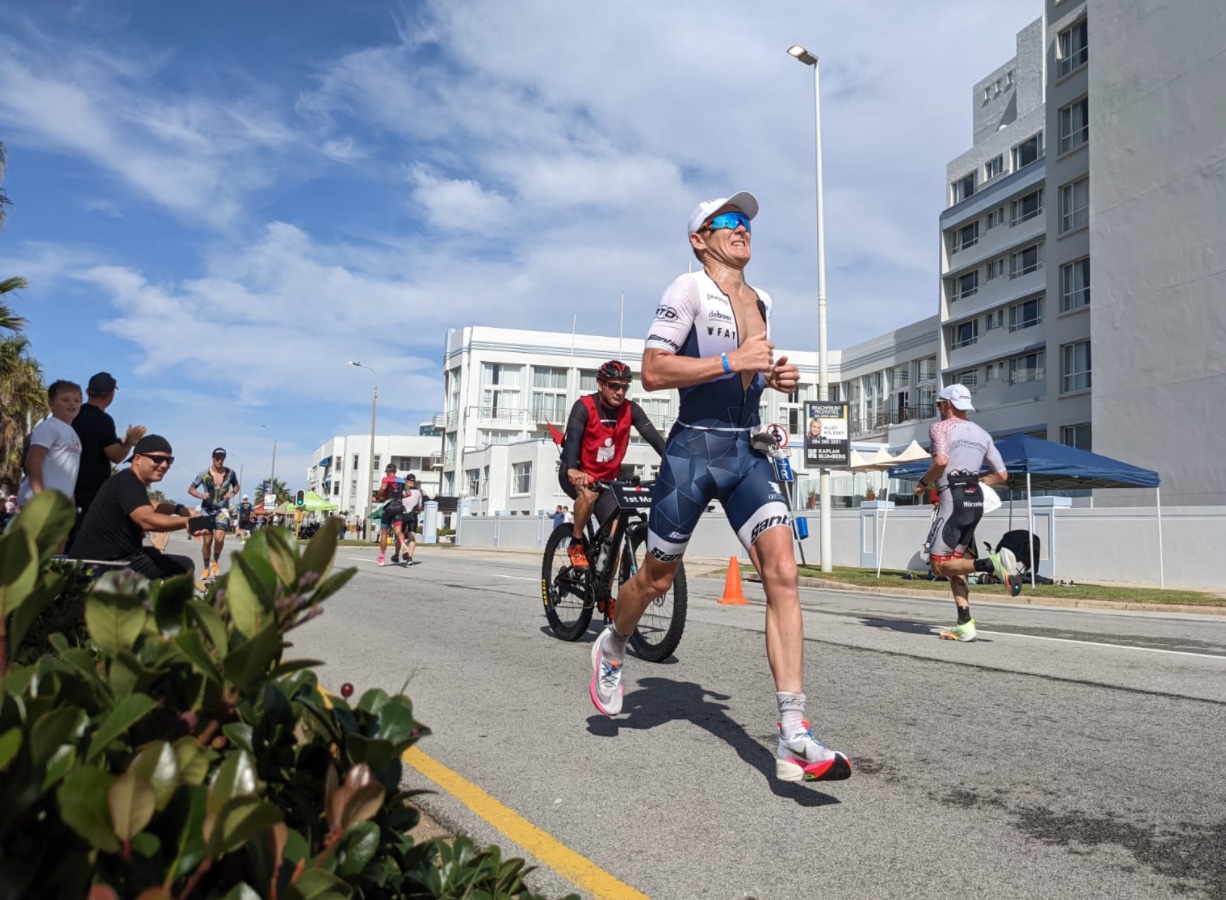 He remained calm when a big pack was formed on the bike and then ran an impressive marathon: Kyle Buckingham’s patience was rewarded with a big hometown win at Ironman South Africa. It wasn’t only Buckingham who was having a great day out there; all South African star athletes were, as all men took a podium spot and therefor claimed their slot for Kona. Buckingham would have nearly lost his golden medal to Bradley Weiss, who came very close in the last kilometers. However, Weiss ended up settling for second, only 19 seconds behind Buckingham. Matt Trautman completed the podium (+1:05).

It was a big disappointment for many pro triathletes today, as the swim was shortened to only 700 meters due to a rough sea. This short swim had a big influence on the entire race, as a big group went out onto the bike course simultaneously. It was Dutch’ Evert Scheltinga who lead the man out of the water after 7:54 minutes of swimming. Many of the top favorites were right in his slipstream. Some athletes that weren’t right in the front after the first discipline, were South Africa’s Bradley Weiss (+0:29), South Africa’s Matt Trautmann and Skipper (+0:51).

Given the short swim, it didn’t take long before a lead group of twelve took shape on the bike. Skipper was able to pass many athletes and join that group after not too long. The first 60 km, not much changed with this group. Despite there being some fast bikers – like Skipper, but also Trautmann and Svensson – nobody placed a real attack.

In the second loop that changed, as the headwind picked up, so did the effort that the “uber bikers” were making. That saw some athletes dropping out of the group, which had the lead group shrink to nine athletes. Both Skipper and Svensson were the once putting in the hard work in front. Other athletes in that group were Trautman, Germany’s Nils Frommhold, America’s Collin Chartier, Swiss’ Samuel Huerzeker and South Africa’s Kyle Buckingham.

By the time T2 came into sight, Skipper and Svensson managed to take off and create a margin towards their chasers before starting the run. With a bike time of 4:22:24 hours behind his name, Svensson was first to rack his bike. Skipper followed in second position, Trautman in third (+0:22), Frommhold in fourth (+0:24), Buckingham in fifth (+0:30) and Weiss had managed to hang on onto the group and changed his bike for running shoes in 6th place (+0:32).

Svensson and Skipper may have enjoyed a nice buffer for a little, they were soon taken over by the South Africans that were battling for the hometown honor. After five km, Buckingham had taken the lead, with Trautman right behind him. After 10 km, Weiss joined the South-Africans by running into the top three, or even two, as he took over Trautman. Svensson moved back and so did Skipper. However, Skipper was able to keep his pace up. With half a marathon in the legs, he was only 1:30 minute behind Buckingham.

These podium positions didn’t change anymore. After a 2:41:35-hour marathon, Buckingham broke the tape. Even though, Weiss really gave everything he had to try to pass Buckingham, it was Buckingham who took the win right in front of his eye. Weiss ended up winning the silver medal, and Trautman took the final podium spot.