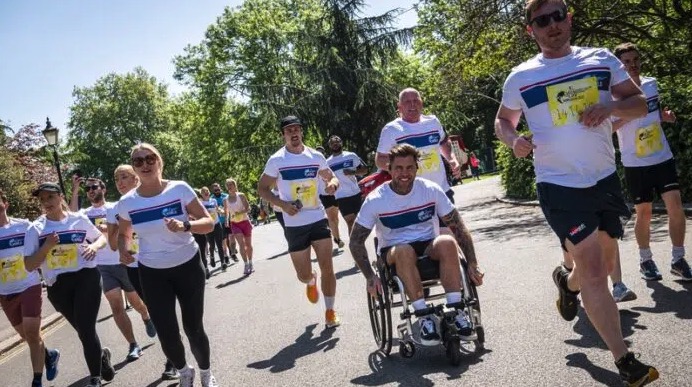 161,892 participants from 192 nations at runs in 165 countries all around the globe were part of the ninth annual edition of the Wings for Life World Run. The runners and wheelchair users raised a total of €4.7 million for spinal cord research through their entry fees and donations. Jo Fukuda (JPN, 64.43km, Fukuoka/JPN) and Nina Zarina (RUS, 56.00km, Santa Monica/USA) were the respective men’s and women’s winners of the 2022 event. British Ultrarunner Tom Evans won the Austrian run in Vienna, running 63.4km in the capital.

This year the participants covered an average 11.9 kilometres by the time the ‘Catcher Car’, the moving finishing line, caught and passed them. “Whenever a lot of people join forces, great things happen,” said Anita Gerhardter, CEO of Wings for Life. “I’m deeply grateful that so many people went out running for our cause.

“Over the past years, we’ve already made big steps towards finding a cure for spinal cord injury. And thanks to today’s participants, we can continue to fund brilliant scientists on their journey.” The ninth edition of the Wings for Life World Run saw thousands of enthusiastic participants joining all around the world individually with the event app or in organized groups at 217 App Run Events, where the participants ran together before being chased down by a Virtual Catcher Car.

This year’s edition also saw the return of seven large-scale Flagship Runs after a two-year hiatus due to the pandemic. Participants ran together in Vienna (Austria), Munich (Germany), Zug (Switzerland), Ljubljana (Slovenia), Zadar (Croatia), Poznan (Poland) and Izmir (Turkey) and were chased by physical Catcher Cars. ‘‘From running novices to experienced ultra-distance runners, old and young, runners and wheelchair users – the starting field of the Wings for Life World Run was again an eclectic mix of humanity. Everyone was welcomed at the Wings for Life World Run as the unique race format made it possible for participants with completely different ability levels to walk, run and roll together for the good cause.”

At the Wings for Life World Run there is no set finish line, but a Catcher Car that sets off in hot pursuit 30 minutes after the runners start, overtaking one participant after another. Since 2014, a grand total of 1,086,988 participants have taken part in the global charity run. The one-millionth participant signed up just this year and ran at the Flagship Run in Zug (SUI), where he proudly carried his ceremonial golden start number. A total of 10,266,768km have been covered since the first event and, most importantly, a total of €38 million has been raised. 100% of all entry fees and donations goes directly to spinal cord research and to help find a cure for spinal cord injury.