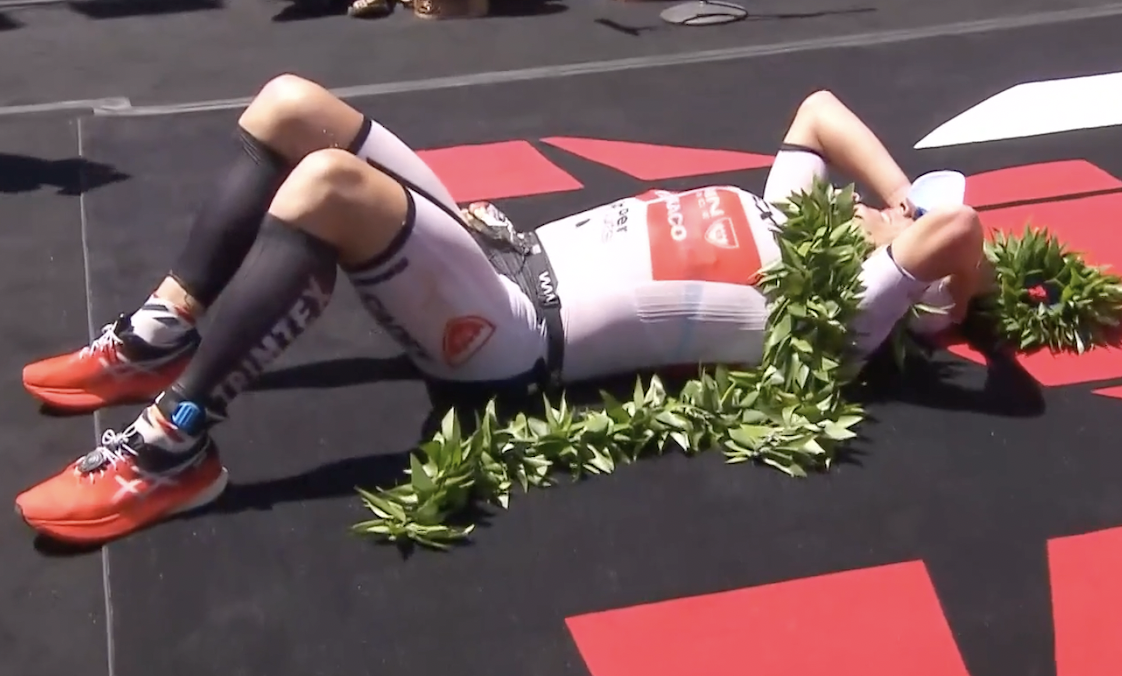 While it was Norway’s Kristian Blummenfelt living up to everyone’s expectations in the men’s race, Swiss’ Daniela Ryf surprised everyone by pulling off a good “old” Ryf race. “I’m back”, she wrote on Instagram, continuing to say: “Well… I actually never left.” We bundled the reactions of the fastest five pro men and women at the Ironman World Championship St. George.

“I’m back. Well… I actually never left. To all my fans: huge thanks for your amazing support. To all the doubters: thanks for the motivation”, she writes with a winky eye emoticon.

Blummenfelt keeps it short, but clear. “Ironman World Champion”, the Olympic champion wrote on Instagram, supported by an emoticon that illustrates how he feels blown away.

With only one month to go until the Pho3nix Sub-8 attempt, Kat Matthews’ second place at the Ironman World Championship must give her some extra confidence. She had to fight hard to try and stay clear of a fast-approaching Anne Haug, but managed to do so and grab silver. On Instagram – under a photo of herself and her husband – Matthews wrote: “Living our best life. Dream Team. Overwhelmed by the triathlon community. Thank you so much for your support, pre race, during and afterwards! So grateful to live this adventure and to meet so many people and give back so much to others too (I’m told).”

It seems like Lionel Sanders had to dig so deep to catch New Zealand’s Braden Currie, that he still hasn’t found the energy to post something on Instagram. Directly after the finish line, Sanders commented this was the “most bizarre race ever” and that he would never forget this battle. With just a few meters to go until the finish line, Sanders managed to pass Currie; something that seemed to be impossible looking at both their paces with one kilometer to go. It was Sanders’ incredible will-power that made the impossible possible.

“It was unbelievably tough. The bike was extreme and during the marathon I nearly died at times. I’m so happy I was able to finish in third.”

Just like Sanders, Currie hasn’t found the time yet to comment on his third place. For a long time Currie was leading the race, but after he had to let Blummenfelt pass him, he also saw Sanders fly by at the very last moment. That means Currie had to settle for bronze.

“Mad respect and congratulations to the ladies on the podium. I am genuinely so happy to see Daniela Ryf dominate today. She has driven us all to be faster and better, and while the smack down is humbling as a competitor. it’s also very inspiring and motivating. Congratulations, Dani!”

“Wow!! Super stoked for a fourth place finish at Ironman World Championship St. George. Such an amazing feeling that I will never forget!”

“What a day!!! Had dreams of top five, and even potentially sneaking onto the podium, but super chuffed with fifth at the Ironman World Championship. Savage course! Thank you for all the most amazing support out there made a huge difference.”

“Fifth in the world. Beyond happy to get that result after a super hard day – as expected, St. George definitely delivered a tough and honest race! I said before that top five is possible, and to execute on race day feels amazing. Thanks for all the messages, support and cheering on course and from home!!! And: keeping the sub-8 streak alive”, Florian Angert, who has never finished a Long Distance in longer than eight hours, said.