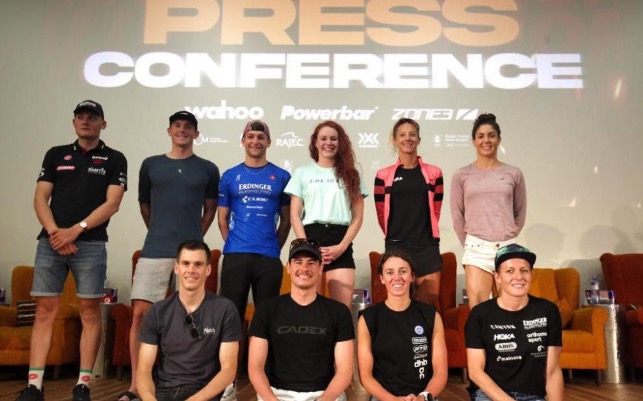 Press conference The Championship – This is what the pros said

Ten of the top seeds for Sunday’s The Championship gave an insight into their hopes for the race at today’s press conference, and with a field of this calibre, the fight for a share of the 100,000 euro prize purse was going to deliver a great day of triathlon they were all looking forward to.

Defending champion, Lucy Buckingham (GBR), said it was a “massive shock” for her winning last year against such a strong field, she was looking forward to defending the title at what promised to be a tough day.

“The course is super challenging, even though the bike is flat it’s quite easy to over-bike and then the run course with the different surfaces is super tough so it’s going to be a challenging day on Sunday!”

Current #2 on the PTO rankings, Gustav Iden (NOR), said he wanted to do something positive after the disappointment of not being able to race St George.

“I tried to fake it until I make it in St George but sadly I didn’t make it! I had a few days when I was really not myself, not only physically but mentally – I had to do something positive and found the perfect opportunity to get in the right mindset with The Championship. I heard the run course is brutal and Lucy just confirmed it, so I will try not to over-bike it and see what I have left in the tank on the run. My fitness is not the best but we’ll see what happens on Sunday.”

Emma Pallant-Browne (GBR) said her collapse at Clash Miami had given her a scare but she was now back on form.

“Miami was scary for me and it I took a real hit afterwards which is unusual for me but I had some down time and now I’ve built back up and am feeling good. I definitely love the hilly bikes, which this is not, but the challenging run is super fun and it’s an honest course, especially with the 20m drafting rule and it makes for a tough day and I’m looking forward to it.”

Frederic Funk (DEU) took third place at The Championship last year and said he was feeling on even better form this year.

“I definitely feel better than last year as last year I was injured before the race but now I think I’m really fit and it would mean a lot to win here on Sunday, especially as I would be the first one in a long time to beat Gustav!”

Ashleigh Gentle (AUS) said she was looking forward to racing against a strong field and using it as a valuable learning experience.

“I’ve decided to move into middle distance racing – I wouldn’t say I’ve completely figured it out yet. It’s a great opportunity to be here to race against these women – that’s where you learn the most when you get to race this calibre of field and that’s why I’m here and I’m really looking forward to it. Winning Miami was a really great day – it suited me well as it was ridiculously hot and humid, just like my home in Brisbane. Coming here it feels fresh and I can actually breath which is nice! This course is completely different but that’s why I’m here and I’m looking forward to challenging myself on different courses so I can find out what I’m good at and where I need to improve.”

Fenella Langridge (GBR) is racing after an eighth place at St George as she starts her campaign to her primary race for the year, DATEV Challenge Roth.

“St George was undoubtedly the hardest race I’ve done. This is my start of my next block and then all roads lead to Roth. It’s such a prestigious event and the girls I’m racing are so strong so to be anywhere near the top would be amazing, it could go either way on Sunday!”

Kyle Smith (NZL) is also racing two weeks after St George and said while he was tired, his head was in the game.

“The muscles aren’t feeling too bad, I’m definitely tired but that’s to be expected when combined with long-haul travel – it’s not going be an easy day but you’ve got to get your head into it and get on with it. I was here last year at the Collins Cup racing Gustav and sadly was horizontal on the bike course! It’d be good to get around the course this time as to take the tape at a major event like this would be very special.”

Daniela Bleymehl (DEU) said she was looking forward to racing after some time off following the birth of her daughter 10 months ago.

“It had been a while without racing for me when I won South Africa which was a great day and now I’m excited to be back here. I did the race in 2019 and I’m feeling like I really want to get back into it after motherhood.”

Mikki Taagholt (DEN) said he loved to race a tough field and was feeling strong.

“I feel pretty good coming into this race. I’m feeling better after Salou and I’m excited to race – it’s a pretty strong field, I love the atmosphere and I love to race the big dogs and I’m excited to be here and see what I can do on Sunday. I’ll have to be in the moment and make the right decisions out on course – it’s going to be insanely hard and that’s what makes it so much fun.”

Richard Varga (SLK) said it was great to race at home and he enjoyed the advantage he gave him and leading out of the swim was where intended to be.