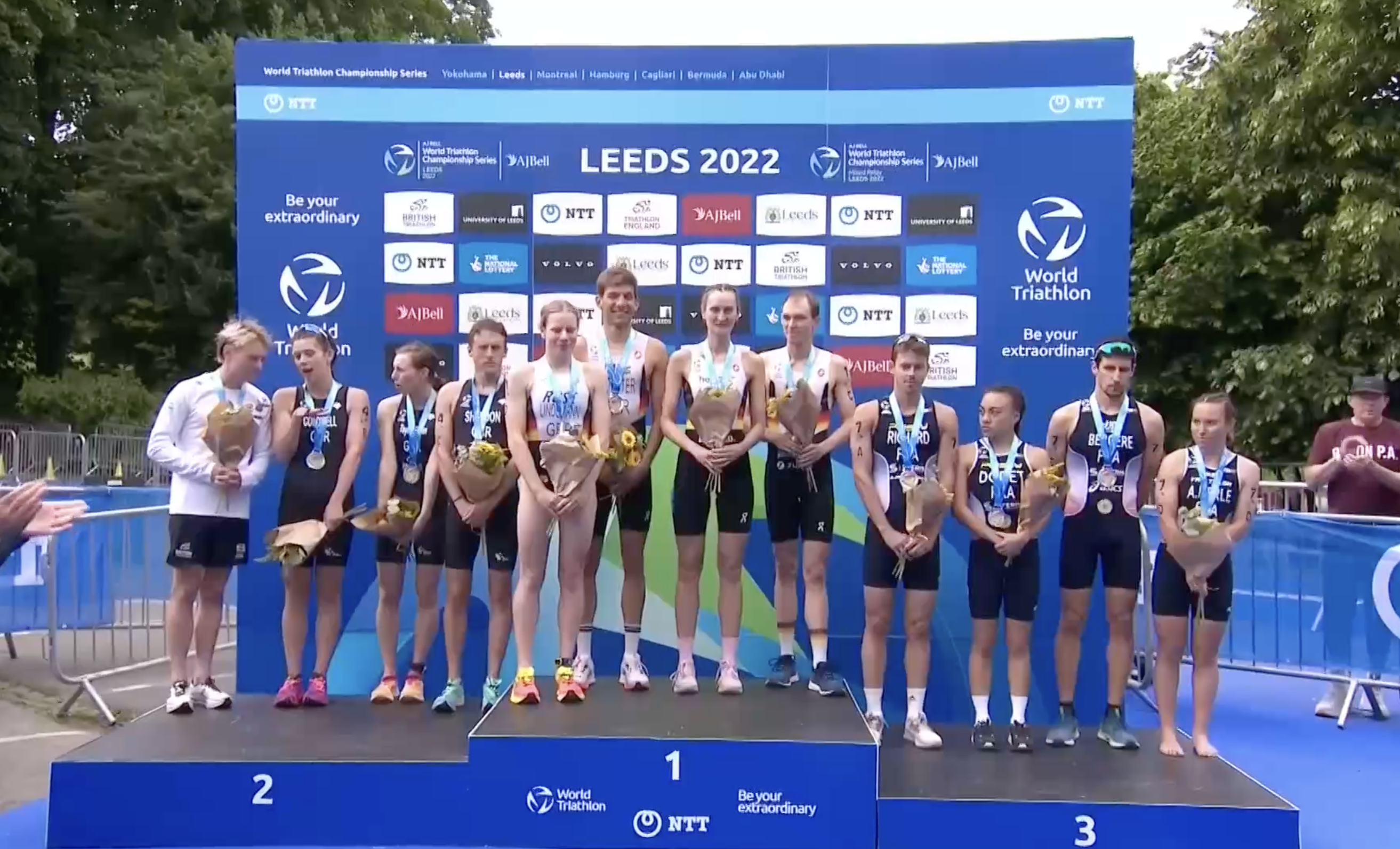 They patiently awaited their turn, but in the third and fourth leg it was clear that Germany’s Mixed Relay team was onto something. Lasse Nygaard Priester, Anabel Knoll, Lasse Lührs and Laura Lindemann claimed a beautiful victory at the World Triathlon Mixed Relay in Leeds. They shared the podium with team Great Britain (Thomas Bishop, Sophie Coldwell, Grant Sheldon and Georgia Taylor-Brown) and team France (Tom Richard, Sandra Dodet, Leo Bergere, Audrey Merle).

Leg 1: Five countries in the lead

Matthews Hauser, for team Australia, was first out of the water. He was followed by team New Zealand and team Swiss. France was 10th out of the water (+0:14), Great Britain 11th (+0:14) and Germany in 14th place (+0:16). On the bike, most of the field – fifteen of the eighteen athletes – stayed together in a big lead pack, but once athletes got to conquer the run a little group of five took shape in the front of the field: Germany, France, The Netherlands, Hungary, and New Zealand. These five created an advantage during the run part, leaving the rest of the field with a deficit of 10 seconds once they ticked off their teammates for the second leg.

Most of the buffer that France, Germany, Hungary, New Zealand and The Netherlands had created in leg one, vanished in the water. Eventually, another few athletes joined the lead on the bike, creating a pack of eleven athletes. Just before T2, Lotte Miller, for Norway, decided to place an attack in order to create a nice buffer for herself for the run. However, Great Britain soon caught up with her. Halfway through the run, Great Britain was in the lead, followed by Belgium, Norway, The Netherlands, and Portugal. Once the third group of athletes got to hit the waters, it was Great Britain who enjoyed the leading position. Germany followed in second (+0:04), Belgium in third (+0:07) and The Netherlands in fourth place (+0:13).

Leg 3: Germany and Belgium take off, France hangs in there

Leg 4: France gets back to the front

In the water, France got back to Germany and Belgium, which saw the three countries merge during the bike part. Meanwhile, Italy, Great Britain and Australia came dangerously close from behind. Only seven seconds behind the leading countries, they racked their bikes into T2. With Belgium having to serve a 10-second penalty, they were overtaken by Italy and Great Britain. Germany ended up running to an incredible win. Great Britain took a strong second place (+0:14), and France completed the podium (+0:20).