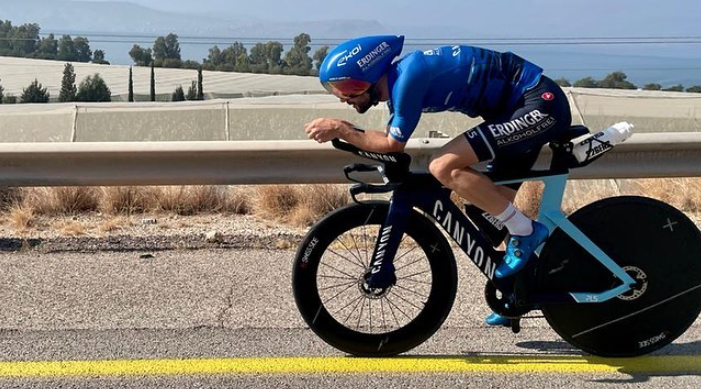 Patrick Lange is definitely back at the highest level; after quite a bit of injury, he just won Ironman Israel. In a thrilling race, he struck during the marathon. Among the women, one woman stood out above the rest: Ruth Astle.

In the men’s race really a lot happened and athletes constantly changed positions; both during the bike and the run. After the swim, Patrick Lange was immediately in a good position; the Dutchman Menno Koolhaas was the fastest swimmer (47:32) but Lange followed in seventh place and was only a minute and a half behind.

That gap disappeared quickly, because already after forty kilometers Patrick Lange joined in and eventually a front group of twelve athletes emerged. In addition to Lange, favorites included Daniel Baekkegard, Florian Angert and Robert Kallin. It was the latter who first got away with three others (Baekkegard, Angert and Salvisberg) but eventually went on a solo adventure. In the closing stages of the bike, Kallin’s lead quickly increased and in T2 Baekkegard, who was second at the time, came back over a minute and a half behind. Angert was third at more than four minutes and Lange fourth at more than eight minutes.

Apparently those eight minutes were not enough to discourage Lange, because the German immediately set a high pace and began to catch up very fast to the leader. As he passed Barnaby hooked on for quite a while, but in the end Lange was too strong and Baekkegard and Kallin couldn’t follow either. After just under 30 kilometers into the run, Lange took off solo and ran toward victory, which he claimed in a time of 7:42:00. Baekkegard was second in 7:43:40 and Barnaby third in 7:47:02.

In the women’s race, it was clear much sooner who would win the race, although Ruth Astle was not at all in the best position after the swim. At the time, the British athlete was more than six minutes behind the fastest swimmer of the day, Lottie Lucas (55:28), in 12th place. Once on the bike, however, that changed rapidly.

Already after 45 kilometers she had made up much of her ground and Astle was already fifth, only 1 minute behind a leading group of four: Susie Cheetham, India Lee, Barbara Riveros and also Lucas. Very quick after that, Astle joined these women. Yet halfway through the bike, that situation also changed again, as some women joined from behind and some lost time from the front. Eventually a leading group emerged with Cheetham, Astle, Riveros and also Daniela Bleymehl, Agnieszka Jerzyk and Maja Stage-Nielsen.

In the closing stages of the bike, however, it was Astle who did not feel like starting the marathon with a large group and pushed the pace once more. With success, because when she returned to T2, her lead had increased to a whopping 2:52 minutes over Bleymehl, 3:02 minutes over Cheetham and more than 7 minutes over Stage-Nielsen.

What followed was a relatively ‘boring’ marathon in which Astle was in no danger anywhere, but where she proved to be a world-class athlete for sure. In the end, Astle claimed victory after 8:41:13. Bleymehl finished second in a time of 8:50:13 and Riveros third in 8:55:49.