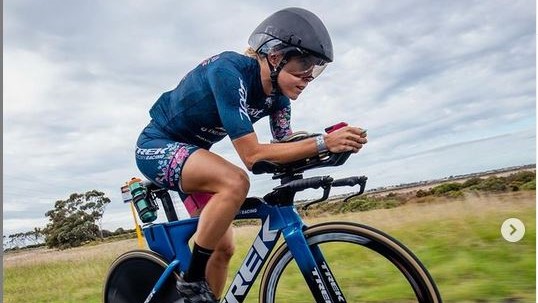 Australia’s Steve McKenna returned to his winning ways by running to the men’s title at Ironman 70.3 Geelong today, while Ellie Salthouse continued her unbeaten 2021 season and moved up a spot on the Geelong podium after her runner-up finish last year to take the women’s race.

McKenna runs to the win

Kiwi Trent Thorpe did a rare thing in leading Josh Amburger out of the water at a half-distance race as the pair came out of the water after the 1.9 km swim 50 seconds ahead of Max Neuman and 1:40 up on a group that included Lachlan Kern, McKenna, Tim Reed and Tim Van Berkel.

Thorpe and Amberger were able to stay ahead of the chasing men through about the first two-thirds of the 90 km ride, but eventually Kern, McKenna, Reid and Van Berkel joined the fun at the front. All seven hit T2 within 14 seconds of each other, but it was the last in the line, Amberger, who had the fastest transition and was first out onto the run. By 3.5 km, though, Reed (the 2016 Ironman 70.3 world champ), McKenna, Van Berkel and Thorpe had moved to teh front, pulling clear of Amberger.

Salthouse from the gun

Ellie Salthouse usually spends much of her training year over in Boulder, Colorado, USA, but has been in Australia for the last year because of the pandemic. Being home certainly doesn’t seem to have affected her training and racing at all – already this year she’s taking the Hell of the West Triathlon and the Husky Australian Championships, both times beating New Zealand’s Amelia Rose Watkinson.

Today it looked like Watkinson might be ready to press for the win as she was part of a group of four that came out of the water together – Salthouse led the way with Grace Thek right on her heels with Stephanie Demestichas hitting T2 in third just ahead of Watkinson.

The race quickly became a two-woman affair, though, as Salthouse powered out in front with Watkinson staying close behind. By the end of the bike Salthouse was nine-seconds up on the Kiwi, who led the way out onto the run course. That lead was momentary, though, as Salthouse quickly took control of the race, opening up 49 seconds on Watkinson by 3.5 km and steadily pulling away.