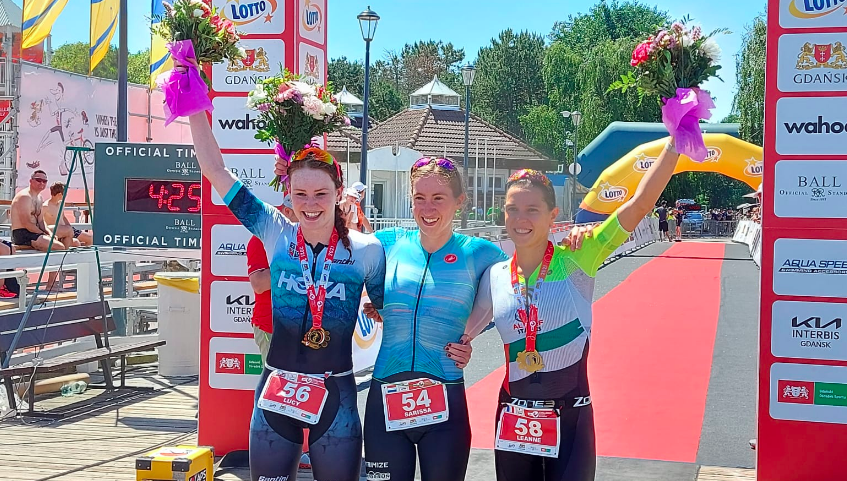 James Teagle has claimed an impressive win at the inaugural Challenge Gdansk in Poland. The Brit took off quickly on the run and the rest of the men’s field could not come anywhere near him over the half marathon. Behind him an exciting battle between South Africa’s Matt Trautman and Spain’s Pablo Dapena Gonzalez saw Trautman put the hammer down on the run and take second place. Dapena Gonzalez took third to complete the podium. Sarissa de Vries from the Netherlands also had an incredible race. She had already shown she was in form earlier this season at Challenge Gran Canaria and Challenge Riccione, but today she showed that she is not yet done with that winning feeling by taking a convincing win at Challenge Gdansk. Behind her Lucy Hall (GBR) – who was in the lead for most of the race – finished second. Leanne Fanoy (NED) completed the podium.

Men’s race
It may have been nearly three years since we last saw him race, but it was no surprise to see Lukasz Wojt – a former swimmer born in Gdańsk, but living in Germany – take the lead in the swim. Wojt had an impressive swim time of 22:21, which was over 40 seconds ahead of his closest competitors: Dapena Gonzalez and Poland’s Brembor Tomasz. Six athletes where on the heels of the first chase group. These chasers included James Teagle (GBR), Franz Loeschke (GER), Matt Trautman (RSA), Henrik Goesch (FIN) and Evert Scheltinga (NED), coming out of the swim 1:39 down on Wojt.

Groups formed on the bike
While initially Wojt seemed to be able to maintain the gap he created in the water, after about 30 km the first men found his wheel. Some shuffling eventually created a six-man-strong lead pack with Wojt, Loeschke, Teagle, Trautman, Dapena Gonzalez and Goesch. Just before T2, though, Teagle broke away and was first on the run, 0:19 ahead.

On the run Teagle quickly took off and it was going to be hard for anyone to catch him, but behind him the interesting battle between Trautman and Dapena Gonzalez was taking shape. Trautman showed he had the best running legs of the two, though. While Teagle lifted the finish tape, the South African sprinted to second place. Dapena Gonzalez crossed the line in third place.

Women’s Race: Hall clocks a faster swim time than some pro men
Catching some pro men – who started two minutes earlier – Great Britain’s Lucy Hall was the fastest swimmer in the women’s field, reaching her bike in 23:43. It was over 1:35 minutes before the second woman, De Vries, followed. Behind her there was a gap of nearly two minutes to Italy’s Santimaria Margie, who was third into T1.

De Vries chases down Hall on the bike
Once in the saddle, Hall continued her attack. She soon increased the gap to De Vries, who was giving her all in the chase. At the halfway mark on the bike, the time difference was three minutes. Lehrieder followed in third . These positions didn’t change during the bike leg with Hall heading out on the run course in first place. De Vries, however, managed to close the gap a little in the final kilometres. The Dutch athlete racked her bike 1:10 behind the Hall.

With De Vries a little over one minute behind, Hall went out on the run course with a dangerous chaser breathing down her neck. After about 5km, De Vries ran herself to first place. Hall hung on for a well-earned second place. Fanoy took the third podium spot, overtaking Germany’s Carolin Lehrieder.