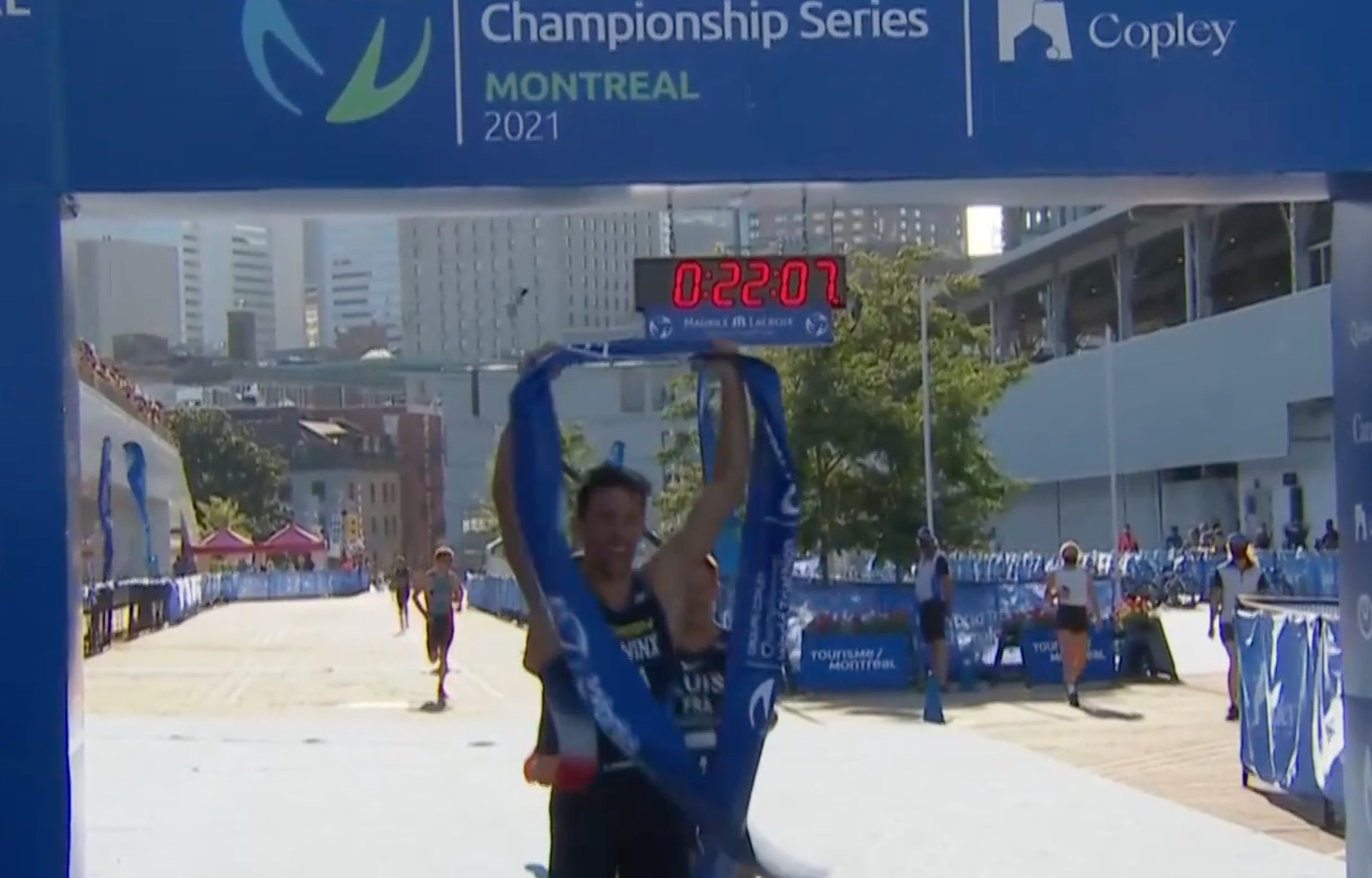 The French athletes were untouchable at today’s World Triathlon Championship Series in Montreal. It was Dorian Coninx who turned out to be the fastest athlete at this extreme and fast event. He took a strong win just ahead of Vincent Luis and Leo Bergere, who respectively finished second and third, which meant it was a French podium clean sweep.

Read our report of the women’s race here.

After yesterday’s qualifier races, 30 men got a ticket to the first heat of the Eliminator format finals. After this first of three very short races – 300 meters of swimming, 7.2 km of cycling and 2 km of running each time – the fastest twenty athletes would make it to the second heat, in which they would have to battle each other over the same distance again to fight for a top ten place. The top ten of this second heat would earn a spot for the third and final heat, taking each other on over this same course again and deciding on who takes the gold.

Heat 1: in a group across the finish line

It’s never really a surprise to see Luis exit the water in first place, and exactly that was what happened in the first heat. America’s Chase McQueen followed eight second later, then soon in a line the rest of the athletes followed. Luis didn’t seem to consider it an option to go off on his own in this “warm-up” round, which was only a matter of being among the first twenty finishers. As a result, nobody dared to breakaway on the bike. Luis nearly lost the connection in the third and final lap due to a technical issue, but as the group didn’t seem to be riding at full speed, the Frenchman could get back soon after fixing – what seemed to be – his chain.

After 7.2 km of cycling, Germany’s Jonas Schomburg was first to enter T1. With a little over twenty athletes sticking together in the front, it was going to be a hard fight until the finish for some of the weaker runners. Nobody really took off before the finish, and that saw a huge group of men approaching the blue carpet simultaneously. Formally, it turned out that Belgium’s Jelle Geens was first of this pack. Among the ten athletes that didn’t make the cut, Schomburg and Takumi Hojo (JPN) – who won the qualifier race yesterday – were most surprising.


Heat 2: eight athletes off on the bike

Again, it was Luis who clocked the fastest swim time. Seven athletes followed in his stream, and after that there was a small gap to a group of chasers. Unlike in the first heat, this resulted in a tough bike part, with the second group hunting down the eight race leaders. After the first of three laps on the bike, the gap between the first and second group was about eight seconds. With the motorbikes staying in between the first and second group, the chasers were enjoying a bit of draft. That didn’t go unnoticed, as Luis signed that they had to move out of the way. That the first group really made an effort to stay ahead was clear as Germany’s Valentin Wernz dropped back to the chasers. Despite the effort, the first seven athletes had ‘only’ eight seconds of an advantage on the first chaser.

While the first eight men had to maintain their spot, the chasers fought for the remaining two qualifying slots. Australia’s Hayden Wilde – who finished third at the Olympics last month – showed to still possess some strong legs for the run, as he was the fastest man from the second group. In the front, Bergere, Kevin McDowell (USA), Marten van Riel (BEL), Tayler Reid (NZL) and Luis formed the top five, crossing the line in this same order. The additional five athletes that would battle for the win in the final heat are Coninx, Wilde, Jacob Birtwhistle (AUS), Seth Rider (USA) and Antonio Serrat Seoane (ESP). From the first bike group, only Miguel Hidalgo didn’t make it until the top ten on the run. Another unexpected athlete to fall short of a ticket to the third heat was Geens.


Heat 3: cat and mouse game on the bike

It’s a familiar view by now: Luis sets the pace on the swim from a leading position. While there were no obvious gaps between these ten athletes after the swim, the field did end up getting spread out over a long line though, with the tenth athlete exiting the water twelve seconds behind Luis. Birtwhistle may have exited the water in ninth place, while running to his bike he nearly lost the connection to the group. Given the high pace that the first athletes set on the bike, the Australian had to work hard to try and catch up. After about 500 meters, he still bridged the gap. Only then he could really put on his shoes and “relax”, which was no understatement for this bike part.

After the first lap of the bike, still all ten men stuck together. It resulted in a bit of a cat and mouse game, with all athletes trying to find the right moment to try and escape. The only one who eventually dared to take off was Rider. Since that was just before T2, he only managed to create a buffer of three seconds before all the other men racked their bikes. Hitting the run course, McDowell was soon out of the race due to what seemed like an Achilles injury. Rider was soon caught and straight after that he dropped back. Wilde couldn’t keep up with the speed in front either. That left Van Riel, Coninx, Luis, Bergere and Serrat Seoane battling for the top five positions.

With the finish line approaching, Coninx and Bergere ran off. Luis was the only one who could somewhat keep up with them, and that made it look like it was going to be a French clean sweep. Coninx took the gold, Luis fought himself to a silver medal and Bergere settled for bronze.