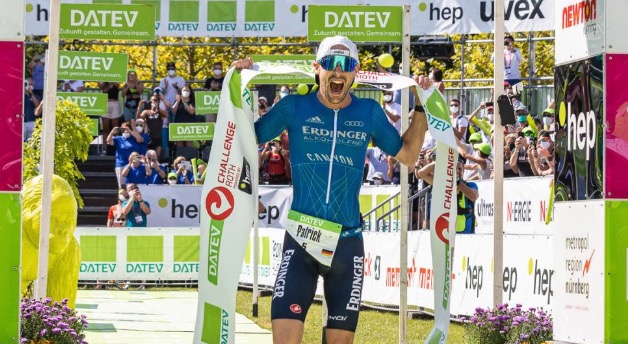 2021 was a year of change for Germany’s Patrick Lange. Not only did he leave his coach Faris Al-Sultan, he also stopped working with his manager Jan Sibbersen, the man behind the popular wetsuit brand Sailfish. It wasn’t only a year of drastic changes, it was also the year that he pulled off an impressive performance at Challenge Roth and won Ironman Tulsa. But one important race was missing again, just like it was for so many triathletes: Ironman Hawaii. In 2022 Lange will have two chances at winning a third Ironman world championship-title. And there’s another reason why 2022 will be a big year for the two-time Ironman world champion: in February, Lange’s releasing his book ‘Becoming Ironman: My Path to Becoming the Triathlon World Champion. In an interview with HNA he talks about this and more.

Lange isn’t the author of the book, but Carola Felcher is, he explains: “We talked for at least two hours a week on the phone, and that for a period of over two years.” Lange mentions that his book will cover some important moments in his career, the highs and lows. One of these lows was when he had to withdraw from Ironman Hawaii in 2019. Also, he talks about changing his management and leaving Al-Sultan, his former coach, to join the squad of Björn Geesmann. Despite lows like these, Lange believes his story can be of great inspiration to others.

His story starts in the German town Bad Wildungen, where Lange grew up. “The book describes how I found my way to the sport.” That wasn’t always an easy road, because many people along the way tried to talk the idea out of his head, Lange says: “When I was thirteen or fourteen years old, I already wanted to practice sports at the highest level. But, when you are that young, people tell you: ‘You’re chasing a dream. Do something smart.’ It’s a typical German expression that keeps coming back. I had to fight it for a long time.” Now, looking back, there were many times at which Lange thought of giving up. “I want to tell people that it’s important that you continue to believe in yourself and that you don’t let others discourage you. If I had given up too fast, I wouldn’t be where I am now.”

Despite all his past successes in Hawaii, and winning both Challenge Roth and Ironman Tulsa this year, Lange wasn’t awarded Triathlete of the Year at the German Triathlon Awards, Jan Frodeno instead was. “I had hoped for a better result”, he told HNA about that. “But it doesn’t bother me. It’s the fans that get to choose, so you only have to look at the reach Jan Frodeno has; I have to admit that he has double the amount of Instagram followers. He just does that very well. This award has less to do with achievements in sports.”

Fans seem to think of Lange and Frodeno as the biggest rivals in the sport, but is that really the case? “I would talk of an inspiring rivalry that brings me positive energy. Jan raised the bar, I followed and raised the bar too, then he followed again. I think we can both benefit from this.”

The full interview – in German – can be found here.