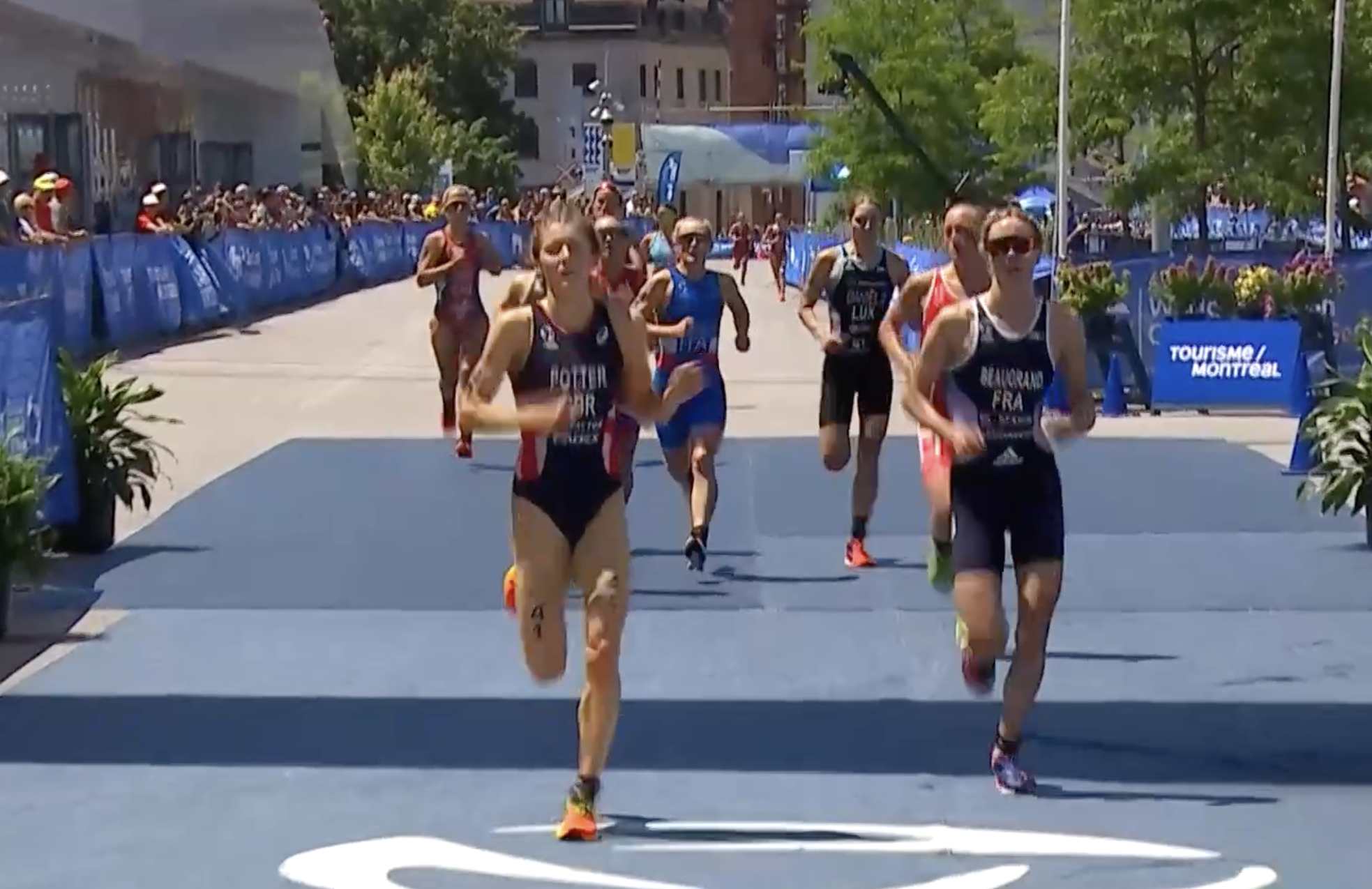 It were Britain’s Georgia Taylor-Brown and Britain’s Beth Potter who were crowned winners of the two qualifier races. It doesn’t mean much yet though, except that they left no space for doubt about being fit enough to race tomorrow’s finals. On Saturday, athletes will race the Eliminator Format of the World Triathlon Championship Series in Montreal, for which they can qualify by finishing top ten in today’s qualifier races, or being among the first 10 in the repachage later today.

Due to a poor water quality – given the heavy rainfall of the last few days – the race format was changed to duathlon. That meant athletes had to run 1000 meters, bike 7.2 km, and then run another 2000 meters.

More than you would expect in a duathlon, things fell apart quite a lot after the first run. That left a group of five athletes in the first bike pack and then a big chase group. Part of that first group was Taylor-Brown, but also Swiss Cathia Schär, Britain’s Sophie Coldwell, America’s Kirsten Kasper and Belgium’s Valerie Barthelemy.

On the run, all these five athletes had to do was maintain their 20-second advantage to the rest of the field. They did so very well and therefor all qualified. It was Taylor-Brown who was first across the line, followed by Kasper and Barthelemy, who were in second and third place respectively. The rest of the positions were as follows: Coldwell in fourth place, Schär in fifth, Australia’s Sophie Linn in sixth place, France’s Audrey Merle in seventh, Swiss Alissa Konig in eight position, America’s Summer Rappaport in ninth and Brazil’s Djenyfer Arnold in tenth place.

Unlike in the first qualifier race, a group of about 20 athletes was still together after the first run. The leading group created an advantage of approximately half a minute to the rest of the field. With such a big group coming into T2 and only 10 slots up for grabs, everything came down to the second run. A few hundred meters into the run, a group of nine was left in front.

Some of the favorites that will have to give it another go in the repachage later today, are Norway’s Lotte Miller, Dutch Rachel Klamer, Australia’s Natalie van Coevorden, New Zealand’s Aisnley Thorpe, America’s Taylor Spivey, Brazil’s Vittoria Lopes, Italy’s Ilaria Zane and Brazil’s Luisa Baptista.